A Look Back at Prescott’s Past

When pressed for information about the rich history of Prescott, Arizona, most residents could probably tell you that the town served as the Capital of the Arizona Territory. They’d also tell you that Prescott hosts the World’s Oldest Rodeo, which has been an annual event every 4th of July weekend since 1888. What they may not know, however, is that the name “Prescott” wasn’t even one of the original proposals when naming the city. Let’s take a few minutes to explore some of the storied history of Prescott.

“A rose by any other name…”

When the site for Prescott was originally selected in 1864, it was intended to replace Fort Whipple as the Territorial Capital of Arizona. Three names were initially proposed, “Audubon,” “Aztlan,” and “Goodwin City,” the last of those in honor of Arizona Territorial Governor John Noble Goodwin. Ultimately, the name “Prescott” was chosen in honor of William H. Prescott, a historian widely recognized to have been the first American scientific historian.

The name “Goodwin” stuck… sort of

While the city may not be named after him, John Goodwin’s name should still be familiar to all of Prescott’s residents: Downtown’s Goodwin Street bears it. He’s not the only governor to have a street in the Historic Downtown named after him either. Goodwin’s predecessor, a man appointed by President Abraham Lincoln, was named John A. Gurley.

There’s a story behind our famous statue 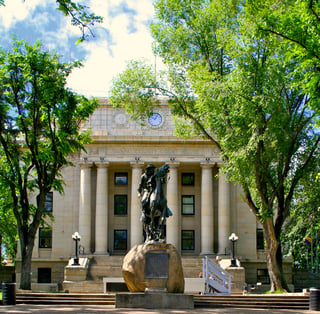 You’ve probably walked by the statue of a rider in Courthouse Square, but did you know that’s modeled after William “Buckey” O’Neil? O’Neil arrived in Prescott in the spring of 1882 and began working as a court reporter. He soon founded his own newspaper, Hoof and Horn, which focused on the livestock industry. Later, after serving as a judge in Yavapai County, O’Neil was elected as county sheriff and then unanimously elected mayor after his term was up. In 1898, after war broke out between the United States and Spain, O’Neil captained Troop A of Teddy Roosevelt’s Rough Riders only to die in battle in San Juan Hill, Cuba.

Not all of Downtown Prescott is original

While you can still see the territory’s original Gubernatorial Mansion (built in 1864) as part of the Sharlot Hall Museum, Downtown Prescott lost four acres, including the original courthouse plaza and much of Whiskey Row, to fires late in the 19th century. This inspired residents at the time to rebuild with brick and helped revitalize the city’s economy after mining in the area ceased being a prime economic driver.

Prescott was the Territorial Capital for 3 years, and 12

Shifting political influences in the Arizona Territory led the legislature to move the capital several times in just a few short years. Prescott served as the capital from 1864 to 1867, when the capital was moved to Tucson, and again from 1877 to 1889, at which point Phoenix was made the permanent capital.

You can grab a historic drink Downtown 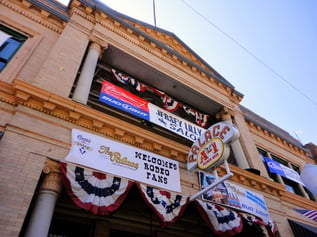 While much of Whiskey Row was lost to fires in 1877, 1883, and finally, 1900, you can still enjoy a drink at the oldest continuously operating business in the entire state when you visit Prescott. As the watering hole of choice for Wyatt Earp and Doc Holliday, The Palace Restaurant and Saloon has seen more than its fair share of Prescott’s history. At one time known as The Palace Hotel, this location has housed mineral offices, brothels, polling places, and even a speakeasy. When you do visit, take note of The Palace’s bar, which is the original 1884 Brunswick Bar that’s famous in its own right. Legend has it that during the 1900 fire on Whiskey Row, bar patrons carried this across the street to the square and continued drinking as the fires burned.

Every town has its own unique history, but not many wear it so proudly as Prescott. From Courthouse Square, to the Victorian architecture dotting Downtown, to the Sharlot Hall and Phippen Museums, Prescott is steeped in the history and heritage of the Old West. Whether it’s having a pint at The Palace or enjoying the World’s Oldest Rodeo, we’d like to invite you to join us in celebrating Prescott’s history. After all, we are “Everybody’s Hometown.”